Estadística INTERACTIVA.
Unemployment has risen sharply during the recession, and young people have been particularly hard hit. Even in good times, the youth unemployment rate (15-to-24-year-olds) can be two to three times that of adults, but it has increased much more rapidly during the crisis; even in Germany, young people are now one and half times more likely to be unemployed than prime age workers, while in Sweden their risk is four times greater. 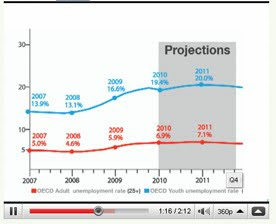 VÍDEO estadístico.
There are currently nearly 15 million unemployed young people in the OECD area, about four million more than at the end of 2007.
In countries like France and Italy, about one youth in four on the labour market is unemployed, while in Spain the level rises to more than 40%. 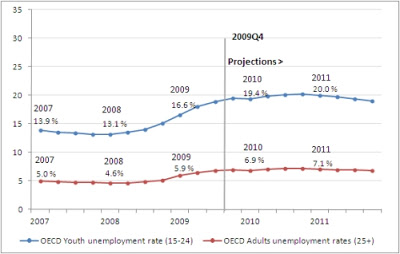 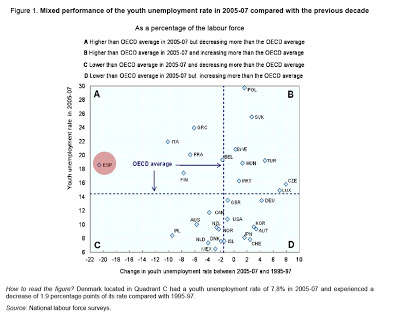 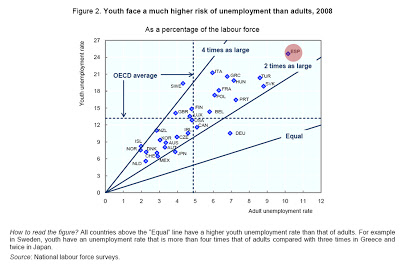 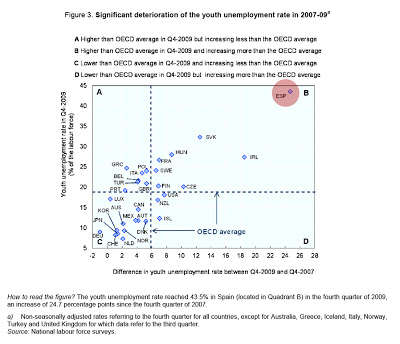 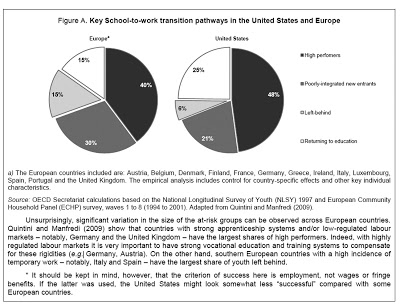 Box 2. School-to-work transition pathways of students having left secondary education
To account for the dynamic nature of youth labour market situations and identify the different pathways that youth can take after leaving secondary education, Quintini and Manfredi (2009) exploit monthly observations in the National Longitudinal Survey of Youth for the United States and the European Community Household Panel survey for Europe.
Figure A shows the share of youth in one of four key pathways identified by Quintini and Manfredi (2009). Over a five-year period after leaving education: «High performers» spend most of their time – 70% or more – in employment and take less than six months to find their first job after leaving school; «Poorly-integrated new entrants» move in and out of employment, unemployment, inactivity and sometimes education, signaling difficulties in settling on a promising career path; «Left-behind» youth spend most of the five years in unemployment or inactivity; «Returning to education» leave education for a spell on the labour market of varying length but ultimately return to complete high school – if they have dropped out before completion – or to attend tertiary education.
The United States has a significantly larger share of high performers than Europe and many more youth return to education after a spell out of work and studying.* As a result, the share of youth facing serious difficulties on the labour market –left behind and poorly-integrated new entrants – is 18 percentage points smaller in the United States than in Europe. In Europe, 30% of youth face difficulties settling into the labour market and another 15% are trapped in long-term unemployment or inactivity. On the other hand, in the United States, poor integration affects 21% of youth and the fact that long-term unemployment is uncommon reduces the share of youth Left Behind to just 6% of youth facing long-term inactivity.