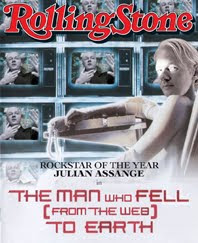 The Rockstar of the year 2010 – honor rendered every December by the Italian edition of the magazine Rolling Stone to the person who best embodied a rock’n’roll behavior during the year – is Julian Assange. The rockstar of the year 2010 edition, for the first time in partnership with the popular website Dagospia.com, will premiered on line both on Rolling Stone and Roberto D’Agostino website, starting on December 13th and will be published also on the monthly magazine, available from December 29th The IT rock’n’roll of silver hair Assange will happily be with us for all the upcoming year 2011. He is the exterminator angel of every rotten power hidden secret. He is the man who fell on Earth from the Net and his resemblance with David Bowie in the 1976 Nicholas Roeg’s movie («The man who fell to earth») is simply amazing. His strategy reminds Marvel best comics and the whole imagery of the platinum «villain» who puts in danger the most powerful men of the world, from the Sixties to today, through William Gibson’s cyberpunk and the «Matrix» cycle.

Assange is an icon like Che Guevara on T-shirts or Mao for Andy Warhol. He is the pop leader of the end of diplomacy and imperial security. Assange is the true rock&roll star of the Three Thousand years.