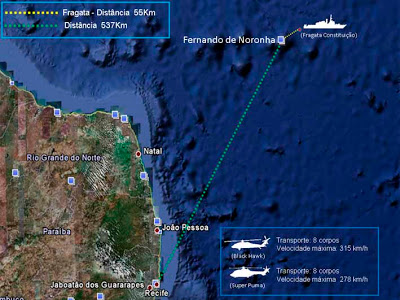 The Brazilian Navy Command and Aeronautical Command inform that, from the beginning of the search until now, the total of bodies recovered from the ocean is 24, all now aboard Brazilian ships.
The last eight bodies recovered, in a joint effort of the Brazilian Navy and the French Navy, will be in due time be sent to Fernando de Noronha, where they will receive initial preparation and afterward transport by plane to the city of Recife (PE).
The Frigate Constituição is around 400 kilometers from the Archipelago of Fernando de Noronha, with the 16 bodies previously rescued. The meteorological conditions have not interfered with the search and rescue operation this day, still there are meteorological formations that indicate bad weather in the proximity of the Archipelago.
Currently the Operation counts with 255 military personnel from the Brazilian Air Force, moved to Natal (RN), Recife and Fernando de Noronha (PE), and 14 aircraft, with 12 being Brazilian Air Force and 2 from France. The H-34 helicopter (Super Puma – FAB) flew from Natal to Fernando de Noronha, in order to directly support the rescue operations.
The Brazilian Navy now has 570 military personnel on board the ships. The Patrol Boat Guaíba substituted the Patrol Boat Grajaú that returns to Natal (RN) to resupply. Thus, five Brazilian Navy ships and one French Navy Frigate, continue in the area of operation.
The search and rescue missions continue, without interruption, and are concentrated on the areas where the bodies were located. The search for other clusters of wreckage continues to be carried out by the R-99 aircraft, and during the night, visual search aircraft work on the transport of supplies to Fernando de Noronha.