We present results of a new probabilistic seismic hazard assessment for Puerto Rico and the U. S. Virgin Islands (PRVI). The study area (Figure 1) is located along the boundary between the northeastern Caribbean Sea and the Atlantic Ocean, at the intersection of the Greater and Lesser Antilles Island chains. These islands demarcate the boundary between the North American and Caribbean tectonic plates, with the North American plate moving west-southwestward relative to the Caribbean plate at a rate determined from GPS geodesy of 19.4 mm/yr (Jansma and others, 2000). West of PRVI the two plates move along typical transform structures (the east-west-striking, left-lateral Oriente and Enriquillo – Plantain Garden faults, and related structures). Southeast of PRVI the North American plate subducts westward beneath the Caribbean plate, forming a typical volcanic island arc (the north-south-trending Lesser Antilles). Plate interaction near PRVI, in contrast, occurs in a 250-kilometer-wide, east-west-trending zone of complex transpressional deformation, delimited by the Puerto Rico Trench in the north and the Muertos Trough in the south. Puerto Rico and the Virgin Islands lie on a shallow submarine bank within this complex deformational zone. 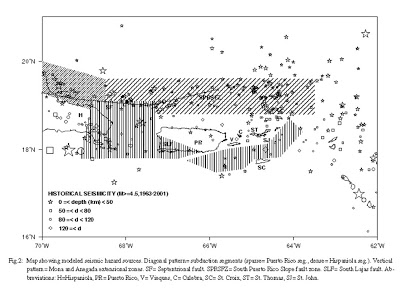