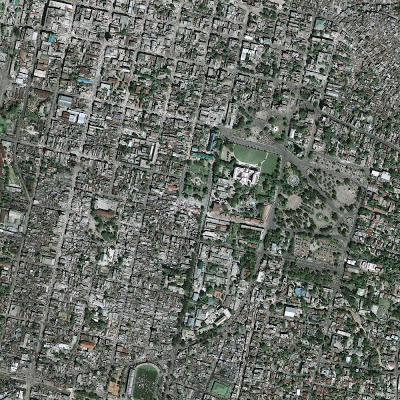 This half-meter resolution satellite image shows Port-au-Prince, Haiti after a 7.0-magnitude earthquake struck the area on Jan. 12, 2010. The image clearly shows extensive damage, roads covered with debris from collapsed structures, and people crowded in the streets and public places such as sports fields and stadiums. The white-colored National Palace shows damage along the roof line. The image was taken by the GeoEye-1 satellite from 423 miles in space at 10:27 a.m. EST on Jan. 13, 2010 as it moved from north to south over the Caribbean at a speed of four miles per second.

The Google Earth team, in cooperation with their partner, GeoEye, has released an update for the Google Earth application showing the devastation that the recent 7.0-magnitude earthquake unleashed in Haiti last Wednesday.