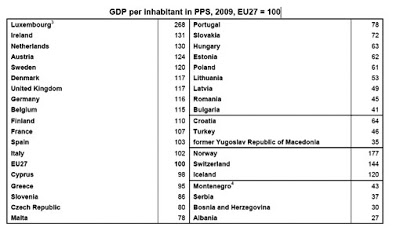 1.
The figures are based on the latest GDP data for 2009 and the most recent PPPs available. Revised estimates will be published in December 2010.
2.
The Purchasing Power Standard (PPS) is an artificial reference currency unit that eliminates price level differences between countries. One PPS buys the same volume of goods and services in all countries. This unit allows meaningful volume comparisons of economic indicators across countries. Aggregates expressed in PPS are derived by dividing aggregates in current prices and national currency by the respective Purchasing Power Parity (PPP). The level of uncertainty associated with the basic price and national accounts data, and the methods used for compiling PPPs imply that differences between countries that have indexes within a close range should be interpreted with care.
3.
The high level of GDP per inhabitant in Luxembourg is partly due to the large share of cross-border workers in total employment. While contributing to GDP, they are not taken into consideration as part of the resident population which is used to calculate GDP per inhabitant.
4.
The figure for Montenegro is based on a preliminary Eurostat estimate of GDP.