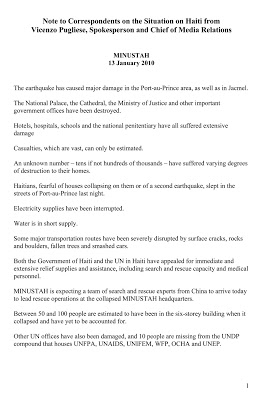 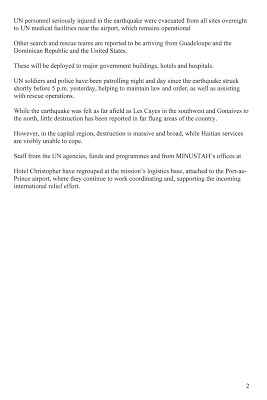 Note to Correspondents on the Situation on Haiti from Vicenzo Pugliese, Spokesperson and Chief of Media Relations
MINUSTAH
13 January 2010
The earthquake has caused major damage in the Port-au-Prince area, as well as in Jacmel.
The National Palace, the Cathedral, the Ministry of Justice and other important government offices have been destroyed.
Hotels, hospitals, schools and the national penitentiary have all suffered extensive damage
Casualties, which are vast, can only be estimated.
An unknown number – tens if not hundreds of thousands – have suffered varying degrees of destruction to their homes.
Haitians, fearful of houses collapsing on them or of a second earthquake, slept in the streets of Port-au-Prince last night.
Electricity supplies have been interrupted.
Water is in short supply.
Some major transportation routes have been severely disrupted by surface cracks, rocks and boulders, fallen trees and smashed cars.
Both the Government of Haiti and the UN in Haiti have appealed for immediate and extensive relief supplies and assistance, including search and rescue capacity and medical personnel.
MINUSTAH is expecting a team of search and rescue experts from China to arrive today to lead rescue operations at the collapsed MINUSTAH headquarters.
Between 50 and 100 people are estimated to have been in the six-storey building when it collapsed and have yet to be accounted for.
Other UN offices have also been damaged, and 10 people are missing from the UNDP compound that houses UNFPA, UNAIDS, UNIFEM, WFP, OCHA and UNEP.
1
UN personnel seriously injured in the earthquake were evacuated from all sites overnight to UN medical facilities near the airport, which remains operational
Other search and rescue teams are reported to be arriving from Guadeloupe and the Dominican Republic and the United States.
These will be deployed to major government buildings, hotels and hospitals.
UN soldiers and police have been patrolling night and day since the earthquake struck shortly before 5 p.m. yesterday, helping to maintain law and order, as well as assisting with rescue operations.
While the earthquake was felt as far afield as Les Cayes in the southwest and Gonaives to the north, little destruction has been reported in far flung areas of the country.
However, in the capital region, destruction is massive and broad, while Haitian services are visibly unable to cope.
Staff from the UN agencies, funds and programmes and from MINUSTAH’s offices at
Hotel Christopher have regrouped at the mission’s logistics base, attached to the Port-au-Prince airport, where they continue to work coordinating and, supporting the incoming international relief effort.